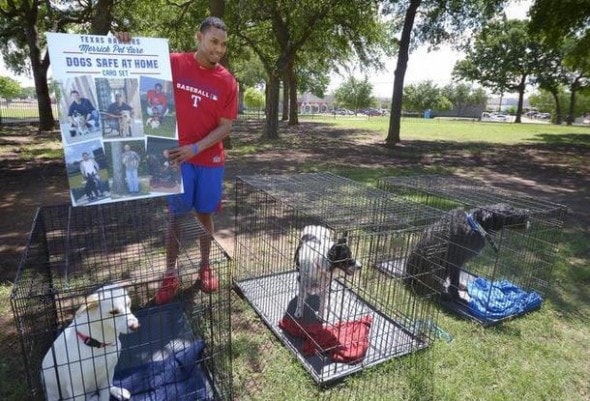 The Texas Rangers Major League Baseball Team and The Humane Society are teaming up to make a series of baseball cards featuring players with dogs from their kennels, in the hopes of finding some of these wonderful dogs forever families and forever homes.

In Arlington, Texas, Engel Beltre posed for cameras with Molly, a young lab mix.  She, along with some of her kennel mates came together to have some photos taken, and it looked like everyone was having a good time.

“She likes that,” Beltre said, as he gave Molly a bit of a tummy rub.  “My little sister and my mother always keep dogs and play with them,” he said.  He doesn’t have a furry friend of his own at the moment, but does plan to get one soon for his 19-month-old son.

Beltre says he’s a fan of all breeds, large and small.

“They’re both some good company,” he said.

This is the last in a series of photos taken for special cards done with the Rangers.  There was a total of 26 shoots with different players, and the title of the series of cards coming out is Dogs Safe at Home.

The commemorative set will sell for $15 at Rangers games, and Humane Society locations, and for $18 online.  All proceeds from sales of the card sets will benefit the Humane Society, and hopefully get the word out that there are some excellent dogs available for adoption at the Humane Society.

All of the cards are four by six inches, and will not only contain all of the stats for the dogs featured, but pet care tips, and a coupon for a discount on Merrick pet products.

Molly came to the shoot on Wednesday with her friends Isabella, a miniature dachshund mix, Shelley, who is a black-and-white cattle dog mix, and Big Joe, a schnauzer mix pictured with first baseman Prince Fielder.  All of these dogs are available for adoption.

“Of all the things we do with the players, this was the easiest, baseball players and dogs,” said Rangers spokesperson John Blake.  “So many of our players have dogs, it was an easy sell – even to the ones who don’t have dogs.”

Megan Harrison, wife of pitcher Matt Harrison is responsible for the idea.  She, her husband and their two furry family members are featured on their own card.  The idea was such a smash with the Texas Rangers Wives Association, that before long, they had 10 Rangers lined up to do shots with their own furry family members, and 15 others borrowing shelter dogs for the gig.

“We have never done anything like this before,” said Whitney Hanson with the Humane Society.  “We were really excited when the Rangers reached out to us to partner with them on this.”

The cards go on sale the 7th of June at a special Adopt-A-Pet event being held at Globe Life Park.  The event starts two hours before the Rangers game with the Cleveland Indians.  The sets will remain on sale at the Texas Rangers Foundation booths at all home games, The Majestic Grand Slam gift shop, Humane Society adoption centers in Fort Worth, Benbrook, Keller and Dallas, and also online. 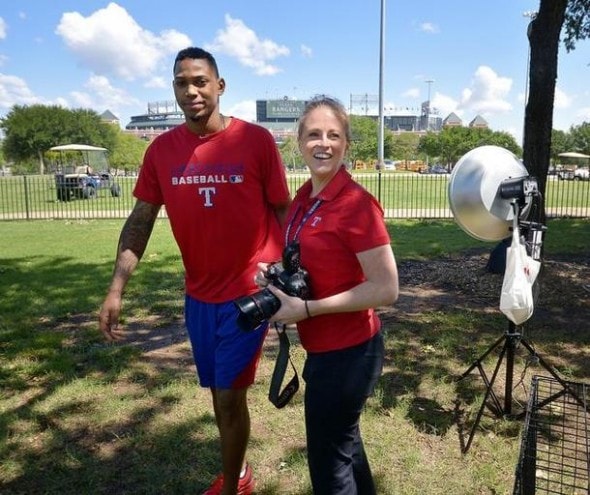 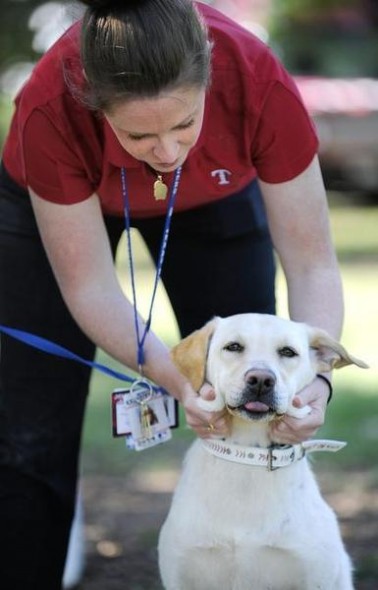 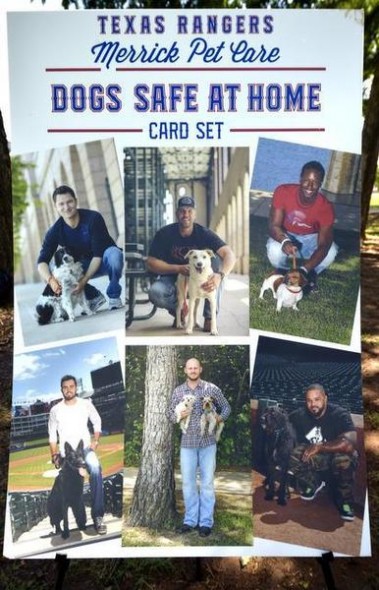