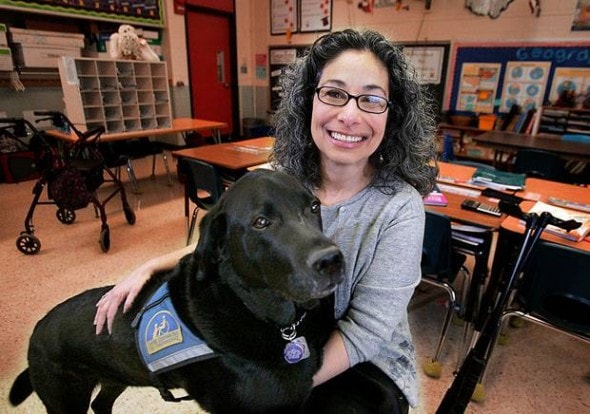 Pauline Siegel’s life is a lot better thanks to her service dog Kazu. The fourth grade teacher has a rare neurological disorder that has caused her to lose most of her mobility below the waist. Kazu has mastered over 50 basic commands and helps Siegel in the classroom and at home with simple tasks like laundry

It was 18 years ago that Siegel lost most of her mobility in her lower body. She suffers from transverse myelitis, a rare neurological disorder caused by inflammation of the spinal cord. She can walk with the help of canes, but spends most of her time in a wheelchair. Getting around is exhausting for the 53-year-old. “My legs aren’t strong, so for me to walk across the room is an event, and it’s incredibly difficult for me to get down to pick something up that I dropped,” Siegel said.

Five years ago Kazu came into Siegel’s life and changed it for the better. Siegel received Kazu from Canine Companions for Independence. She underwent an evaluation process and found her match. “I realized pretty quickly that this wonderful creature can change your life more than I could have ever imagined,” Siegel said. “I just fell in love with him right away.

Kazu knows over 50 commands. He performs simple tasks such as fetching Siegel’s pen if she drops to more complex tasks like helping her with her laundry. When Siegel’s dryer finishes she give Kazu the command and he pulls a laundry basket down the hallway into the laundry room, opens the dryer door, unloads the laundry into the basket and then brings it to Siegel for her to fold. “We call him the Amazing Kazu because he just never ceases to amaze us,” Siegel said.

Everyday Kazu accompanies Siegel to Worthington Estates Elementary School in Ohio and makes teaching a much easier task for Siegel. “Before she got Kazu, she was never a complainer, but now that I see what he does for her, I can see that it saves her so much stress,” said Siegel’s colleague Dana Coughlin. “Having Kazu there for her is such a big help.”

Kazu enjoys being a regular dog too, chasing balls and Frisbees, but he gets joy out of helping Siegel. “They live for seeing your joy, happiness and excitement,” Siegel said. “They know what their job is, and they’re very proud of it.”