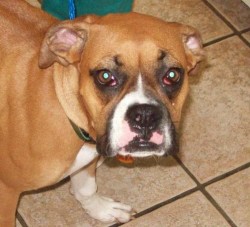 What we do know about a dog’s brain is that it has much in common with our own brain, and the brains of other mammals, especially when it comes to fear. Few of us need to see the research documenting which parts of a dog’s brain are active when they are afraid, or that specific hormones are found in their bodies that occur when they (or we) are stressed, to agree that dogs feel fear. All we need to do is look at the dog.

Despite the fact that our own brains which allow us to take imagination and compassion to levels we believe other animals incapable of, we can be astoundingly callous when it comes to the emotional state of our pets. I am not sure why this is, I suspect that it has to do with the fact that as varied and sophisticated any animal’s ability to convey their fear is, from cowering to screaming, it can never match our own. That and a generous dose of self-centeredness likely contributes as well.

This was drummed home for me recently when I tried to explain to someone wanting to adopt a dog how terrified the dog would be if he were to be handed over to strangers and subjected to a long transport. The response to my concern was basically, ‘he’s going to be scared one way or another so just do it, he’ll get over it’. Had there been no alternative I might have understood this response (thought still would have found it insensitive), but I had offered an alternative which would not only spare the dog some of the stress, it would ultimately contribute to his success in his new home. My suggestion was declined because the person interested in the dog wanted him ‘right away’. I don’t think that this person was ‘bad’ or would not be a good pet owner, I understood that they did not comprehend the effects of fear and stress on dogs. And so what if he would get over it? Easy for us to say, we’re not the one living the nightmare.

It would go without saying that someone was being cruel and inhumane were they to subject a dog to physical suffering. You don’t have to look far to find rallying cries, and petitions, against people who starve or beat dogs. We seem to fail to connect the dots and see that emotional suffering IS physical suffering. Following are some of the signs of stress in humans. Some are directly applicable to dogs and obvious to us, others we can extrapolate and make the assumption that a dog could be experiencing similar responses.

Think about these signs the next time you find yourself interacting with a fearful dog. There’s only so much they can communicate to us by their behavior. But there’s always more we can understand by using our heads.
[dcs_head top=”0″ color=”#666666″] [/dcs_head] For more information about the most effective and humane ways to work with fearful dogs please visit the Fearfuldogs.com website.

3 thoughts on “The Feeling of Fear”