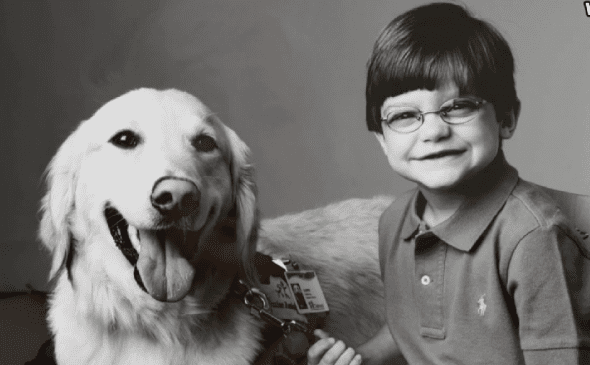 A special young boy named Creed Campbell spent most of his short life battling illness. He spent half his life in the hospital, but thanks to a special bond formed with a service dog named Casper the young boy had a best friend and happy memories.

Casper, a therapy dog from Canine Assistants, began his work at Children’s Healthcare of Atlanta at Scottish Rite. Creed was one of the first patients Casper worked with and the two soon developed a strong bond that went beyond the normal therapy dog relationship. The two spent countless hours together and finally gave Creed a best friend.

“I don’t think he ever saw Casper as a dog,” said Creed’s father Jon.

The bond was so strong that one time Casper saved Creed’s life. One day Creed was on the verge of death having coded twice. Then Casper came and put his paw on Creeds hand, and miraculously Creed came back around.

Creed’s health wouldn’t last though and in the spring of 2012 Creed lost his lifelong battle against illness. Casper came for one last visit, but the dog sensed that his friend was gone.

Soon after Creed’s passing a new litter of puppies were born that would be trained to be therapy dogs. One of those puppies was named in honor of Creed.