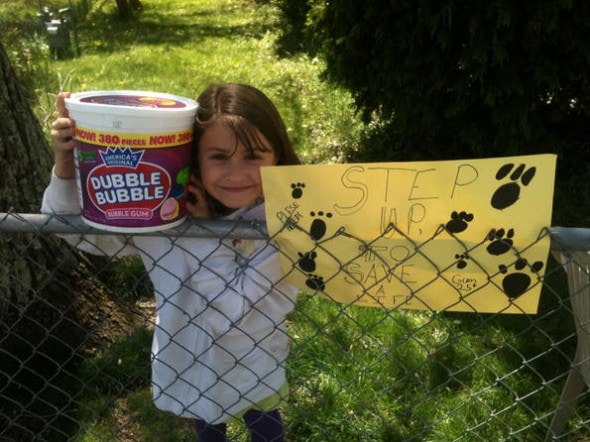 At only eight-years-old Hannah Stricker is doing what she can to help shelter dogs. The third-grader from West Virginia is selling bubble gum to offset the adoption fees of dogs at her local shelter.

The typical adoption fee at the Kanawha-Charleston Animal Shelter is $76. In only four days Hannah sold enough 25-cent bubble gum to cover the adoption fee for one dog at the shelter.

“[Hannah] likes to be able to help out as best she can,” said her mother, Nina Shell. “She’s really driven.”

Hannah first became involved with the shelter through her Girl Scouts troop. She has always has a love of dogs and her family has two. One of their dogs they rescued when they found it roaming the streets.

Once Hannah raised her first $76 she had a decision to make; which dog should she sponsor? Her choice was between a puppy and an older dog. She really liked both of the dogs, but ultimately chose the older one.

“I knew the smaller one was cuter than the other and that one would be easier to adopt,” said Hannah.

Heidi, a 6-year-old shepherd mix was the lucky dog chosen by Hannah. Heidi had been turned in by her owner and is in need of a good home. As of Friday Heidi was still at the shelter. Now that her adoption fee is covered the shelter and Hannah are hoping that she will find a home soon.

Another benefit to choosing a senior dog for her first sponsorship is that the shelter runs a special on senior dog adoption fees. To encourage people to adopt senior pets the shelter allows people to adopt them at half-price. Therefore Hannah was able to take half of the money she raised and put it towards another dog.

She chose Alex, a three-year-old Rottweiler-shepherd mix. Alex has been at the shelter longer than any of the other dogs. Thanks to Hannah his adoption fee is now cut in half, which will hopefully help him get out of the shelter and into a good home.

Hannah isn’t done yet though. She is working towards being able to sponsor another dog. She has raised $17 so far towards her next dog.