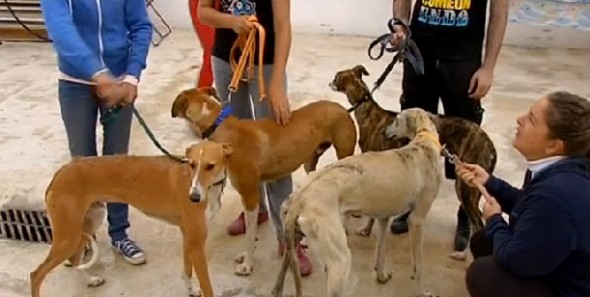 In Spain, police and animal protection services from Callosa de Segura found 13 dogs in an abandoned swimming pool lot. The dogs were malnourished, abused, dehydrated and infested with fleas. Some dogs were trapped inside the rundown pool with no way of escaping, while others were tied in the surrounding areas with short chains.

“It was not a nice scene to see,” said Maria Jose Ruiz from Protectora Adapac. “The dogs were trapped inside the [empty] swimming pool and I just jumped in without thinking. Most of the dogs came to me immediately.”

The rescued dogs are seven Greyhounds, one Podenco and one female Bodeguero with her four puppies. Police believe that the dogs had been previously stolen a few weeks before and now abandoned in the empty lot.

Ruiz had hot dogs with her and she used the food to lure the dogs to her.

“The mom dog was the only one that didn’t come to me,” said Ruiz. “She was very fearful and close to passing out along her little puppies. Not even the food I offered her was enough to make her come to me.”

According to Ruiz, the dogs trapped inside the pool were roaming free in the sunken hole, but had no food, water, or a way to protect themselves from the environment. The place also had other abandoned dogs tied to iron fences with chain leashes no longer than 3 feet long.

“We believe the Greyhounds had been stolen from their owners in order to be re-sold,” said Noelia Ruelme from Protectora Adapac. “Gypsies usually steal Greyhounds to sell them, use them in dog fights with pit bulls or breed them and sell their puppies.”

All 13 dogs are now under the care of Protectora Adapac. The organization has teamed up with a German rescue group that has collected 200 euros to help the animals.