Two rescued animals in Georgia are gaining a lot of fans after forming a unique friendship. Roo is a two-legged Chihuahua that uses a wheelchair to get around. His best friend is a chicken named Penny. The two have become inseparable and are endearing themselves to people all over.

Penny was only nine weeks old when Alicia Williams saved her from a laboratory. Williams works at the Duluth Animal Hospital and happened to be in the right place at the right time to save Penny.

“She was an experimental chicken in the program and she had run the course of the experiment, so that was it for her,” said Williams. “I happened to be there…I asked if I could have her instead of them doing anything with her.”

Penny came home with Williams and soon became a regular at the Duluth Animal Hospital. Many were intrigued by the silky chicken, but when Williams saved another animal last February Penny’s popularity grew.

Roo was just 7-weeks-old when he was found abandoned in a park. His front legs were not fully developed. 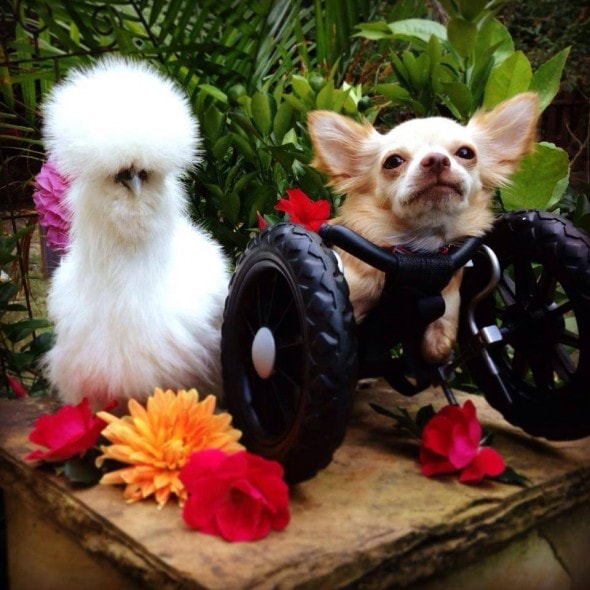 “It was probably a backyard breeder, breeding a bunch of puppies and he ended up deformed,” said Williams. “He was probably dropped off because he couldn’t sell him. It was a freezing that night in February when they happened to see him.”

Roo has since been equipped with a special wheelchair to help him get around, but even more unique than his wheelchair is his special friendship with Penny. They love being around each other and are often spotted napping together.

“They get along really well,” said Williams. “Penny gets excited when Roo is around because she knows he’s got treats and food all of the time. Whenever she hears him being fed, she steals his food. He loves snuggling with her because that’s his big teddy bear. He runs over her sometimes because he doesn’t realize how big his wheels are.”

The unique pair has captured the hearts of everyone at Duluth Animal Hospital and many people will schedule their appointments based on when Penny and Roo will be there. Some people just stop by to see the pair.

Their popularity has spread beyond the animal hospital. Adorable photos of the two posted on the Duluth Animal Hospital’s Facebook page have quickly gone viral and the pair is gaining fans from all over.