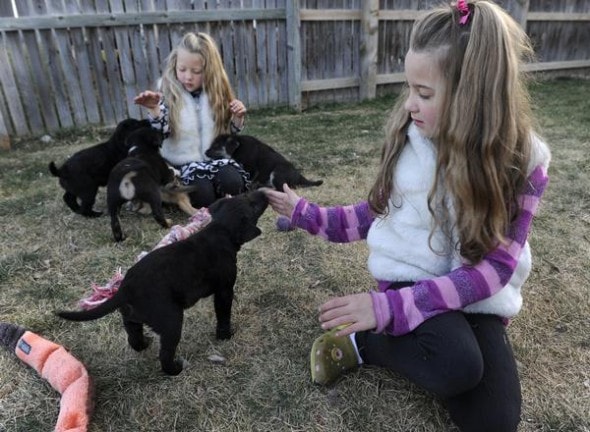 Two years ago Maria and Sophia had to say goodbye to their beloved pug Rocky right before the holidays. The devastated girls used the experience and grief to help other dogs in need. Over the past two years the two girls have raised over $5,000 to help shelters and organizations that help animals in need.

Maria was six-years-old and Sophia was only four-years-old when they had to say goodbye to Rocky in the fall of 2010. The 12-year-old pug had to be euthanized after suffering from a lingering illness. Their mother Melissa France took the time to have a heart-to-heart with the young girls. She explained to them that many other pets also have to be euthanized, and not because they are sick and old like Rocky was, but because they don’t have a home.

The girls were devastated over the loss of Rocky, but after hearing about other animals that were being put down solely because they lacked a home they wanted to help. “Maria said we had to do something to help these animals,” Melissa said. “Sophia agreed.”

With the help of their parents the girls decided to make specially made Christmas lotions and donate the proceeds to help animals in need. Their mother Melissa writes for a skin-care trade publication and their father Michael is CEO of Colorado Quality Products, which makes personal-care products. With their parents help they worked out the details for the project they call “Make a Sale, Save a Tail.”

Over the first two-years they two girls raised $5,000. They have donated the proceeds to several different organizations including Shelter-Me Photography, Big Dogs-Huge Paws, Safe Harbor and Angels with Paws. They are hoping to top $5,000 this year. “This is a family affair,” Melissa said. “It’s busy, but it has brought us together. It’s good to spend weekends together.”

To find out more information on Make a Sale, Save a Tail visit their website and Facebook page.