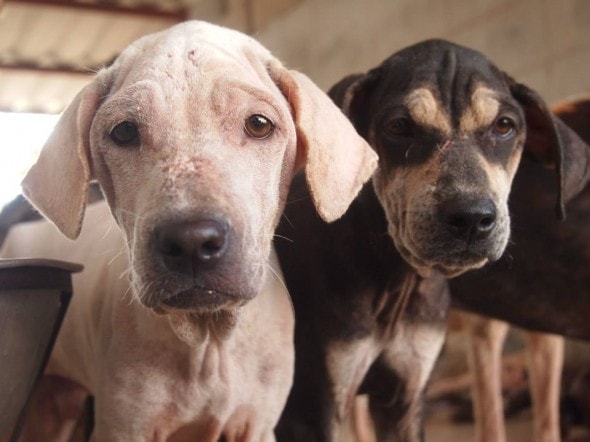 Two puppies were rescued in Thailand after someone saw them being thrown out of a car onto the side of a road, as if they were just garbage to discard and be rid of. The two hairless dogs were brought to Soi Dog Foundation just in time for the organization’s 10th anniversary.

To commemorate the occasion, they were appropriately named Celebration and Anniversary. After the concerned person saw the two brothers being tossed out, a search ensued in order to bring them to safety. Celebration was found first and then, after two more days searching, Anniversary was also found and joined his brother at Soi Dog.

Both puppies had terrible cases of mange making it impossible to even tell what color they were as they were completely hairless! Now they both have improved dramatically since their arrival and are as cute and mischievous as can be. They are out of the clinic and living with other rescued dogs at Soi Dog’s shelter. 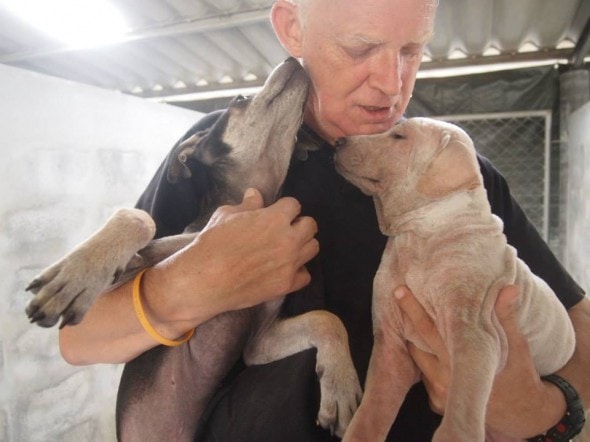 Soi Dog Foundation is a non-profit, legally registered charitable organization, working to rescue the homeless, neglected and abused dogs and cats of Thailand. Their aim is to set an example for the Asian region on how to humanely reduce the number of unwanted dogs and cats through spaying and neutering, and to better the lives and living conditions of the stray dogs and feral cats of Asia. They have sterilized over 49,139 dogs and cats as of March, 2013.

If you are interested in sponsoring a dog or supporting Soi Dog, you can turn to their website at: https://www.soidog.org .  Your money would go towards the medical treatment and ongoing care that dogs like Celebration and Anniversary need.