Note:  Suzy Chandler and Jacqueline Berlin are incorrectly labeled as each other in the news video.

Kailey was one of those incredibly hard-to-place dogs.  She had been abused, and tended to snap at new people.  She spent a year in a shelter and was days from being euthanized.  But when the perfect person came along to adopt her, she saved more than just Kailey’s life, because this heroic dog saved many from what could have been a catastrophic explosion.

Last month, Suzy Chandler adopted Kailey after a public plea was made on her behalf by foster parents Jacqueline Berlin and Keith Santer-Peham.  Though the three-year-old shepherd mix was cute, her trust issues were preventing her from leaving DeKalb County Animal Services for good, and in two days, she was scheduled to be put down.

“Her one issue was that something has happened to her in in her past so that if you try to touch her and she did not know you she would snap at you,” Jacqueline told Fox 5.  “Because of her issue it was really hard to get her adopted.”

So she put a post on the Atlanta shelter’s Facebook page, appealing to introverts who might enjoy having a “Velcro dog” – that is, once Kailey got to know them.  Suzy was intrigued by the post, and applied to adopt.  In just a few short weeks, she would be unbelievably glad that she had.

“The story of what she had been through and it just pulled on our heartstrings, we just thought we would be the perfect people for her,” Suzy said.  “It was a perfect match.” 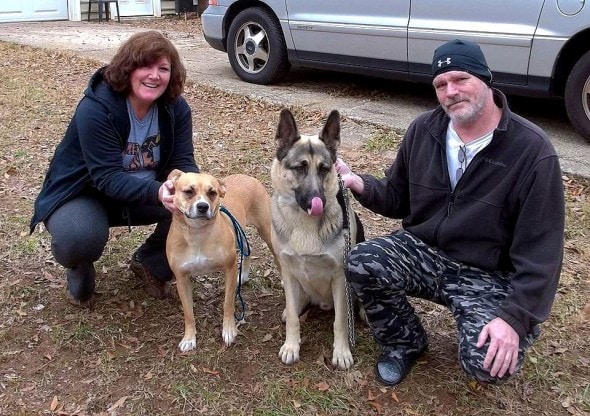 “All of a sudden she just started barking and looking at us and growling, like trying to get our attention and I said, ‘Well, what’s the matter with her?’”

She brought Kailey outside, and was immediately dragged to an area beside the house.

“She pulled me directly over to the side yard,” Suzy explained.  “Right away I smelled overpowering gas and [heard] a loud whooshing sound.”

“It was coming from next door to them where there is an apartment building full of children,” Jacqueline said on her Facebook page.  “If one person had lit a match, it could’ve been a bad scene.”

Suzy called 911, and the DeKalb County Fire team arrived to monitor the air quality at the apartment complex.  Fortunately, everyone was alright and nothing more serious occurred as a result of the leak.

Suzy hopes this will serve as an inspiration for others to adopt shelter dogs.  Not only will you be saving a life, but someday, they may save yours.

“If you have the space, you have room in your heart to take in a needy animal, to love on them, I mean it comes back to you tenfold,” she said.