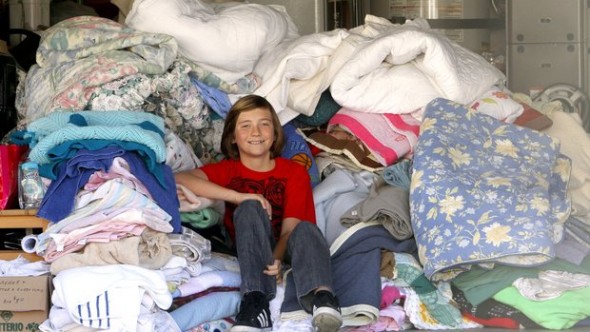 When 12-year-old Kaden Rutherford’s dog went missing he searched everywhere for her, including the local Humane Society. While at the shelter he was saddened to see dogs curled up on cold floors without blankets. Kaden was moved by what he saw and wanted to get blankets for all the dogs in San Diego County shelters.

In August, Kaden’s beloved 1-year-old Shih Tzu Suki went missing from his yard. “We had some friends dog-sitting, and she put her in the back yard, and 10 minutes later she wasn’t back there anymore,” said Kaden. Along with his mom, he searched everywhere for Suki, posting flyers and visiting shelters. While visiting a shelter Kaden was upset that the dogs didn’t have blankets. “I noticed that all the dogs weren’t sleeping on blankets,” he said. “Sometimes there was a small blanket, but two dogs would be using it and there wasn’t room for the third one (in the kennel).” Kaden wanted to help.

At first Kaden set out to raise 100 blankets to fill the kennels, and started by using his allowance money. “I used  some of my allowance money. All of it, actually,” he said. “I had a giant crayon full of money, and that all went to blankets. I took money out of my savings account. And my mom helped a little.” Kaden used the money to buy blankets for the shelter dogs and even contributed a blanket from his own bed.

Kaden made his first delivery to the San Diego Humane Society and SPCA the Monday before Thanksgiving. The blankets were a hit. When Kaden put the first blanket inside of a kennel the dog sniffed it and immediately curled up on it. Kaden decided he wanted to do more, he wanted all the shelter dogs in San Diego County to have a blanket.

Kaden took the rest of his savings and went to the Salvation Army to get more used blankets. The manager had heard Kaden’s story and made him a bulk deal of 100 blankets for $60 dollars, which he took to the Humane Society’s Central Campus. Then in early December he dropped more blankets off at the Rancho Coastal Humane Society in Encinitas. “He’s bound and determined,” said Kaden’s mom Kedda.

When Kaden received money from his grandmother for Christmas he decided to put most of it towards blankets. In total Kaden has delivered about 450 blankets and towels to five different shelters since he started right before Thanksgiving. Kaden is just getting started with his work for animals he says. He is too young to volunteer at the animal shelter, but plans to once he reaches the age of 14, “I’ve always had a passion for animals. This is just making my passion bigger.”

Those wishing to help Kaden can make a monetary donation to the following address: