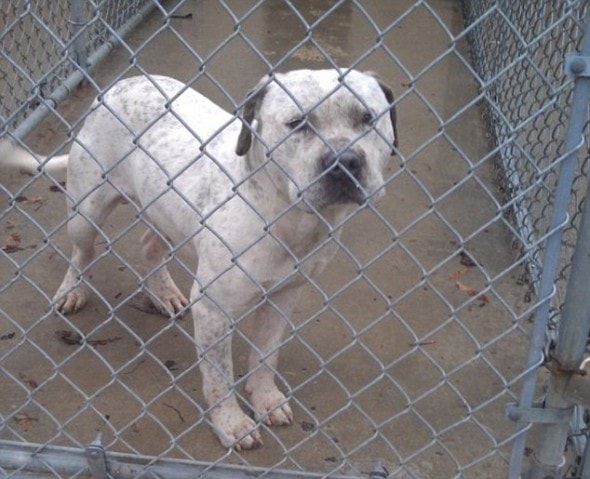 It’s good news today for the poor dog that was surrendered by his owner for being “gay”.  The dog, an American bulldog mix, is a healthy and well adjusted pup who just happened to mount another male dog, leading his uninformed and apparently homophobic owner to believe that he was “gay”.  The dog was at a high kill shelter in Tennessee about to be euthanized when thanks to a Facebook campaign his life was spared.

The pup is being adopted by Stephanie Fryns, who is affiliated with a rescue group called Woof Connections.  “I am adopting this big boy first thing in the morning,” she wrote on the Facebook page for the animal rescue group Save The Animals Together (S.T.A.T.). “He will be neutered/ htwm tested/ and vetted. He will be temperament tested and then placed in a rescue verified and approved home.”

He was saved with only hours to spare as he was scheduled to be put down at 1:00 pm today and was picked up this morning.  Hopefully this lucky pooch will end up in home where he will be loved and cared for, with an owner who understands what normal dog behaviour looks like.  Kudos to all who rallied to save his life, and the lives of other pooches in his predicament.