Back on 11/9, we brought you the story of a dog that was found in the Dallas Fort Worth, Texas area standing guard over his friend that was struck by a car and killed.  Now, that rescued dog’s human has been found, and they are reunited.

A resident of the area, Julie Fennell, was driving down the road where the incident happened, and stopped to help.  She ended up rescuing the dog and getting him to a local shelter to have a medical evaluation, and to see if a human family member could be found to claim him.

“He was obviously being loyal to a friend who passed away and he’s mourning,” said Fennell in news interviews.  “He was just kind of sitting guard, like a statue.  Just sitting there watching over his friend’s body.  It really looks like she was hit in the road.  You can see the blood in the road, and it looks like he drug her up onto the grass out of the road.”

Upon arrival, the dog was checked out and was found to be in perfect health.  It was also found that the dog had no ID, collar or microchip embedded with his family’s information on it.  Things were uncertain.  What would they do with him if no one came to claim him?

As luck would have it, a human was found, and the two are reunited once again.  It was discovered that the dogs were named Brian and Marley, and had both escaped the yard when someone left the garage door open.

The family is sad about the loss of Marley, but are also very happy to have Brian back and in one piece. 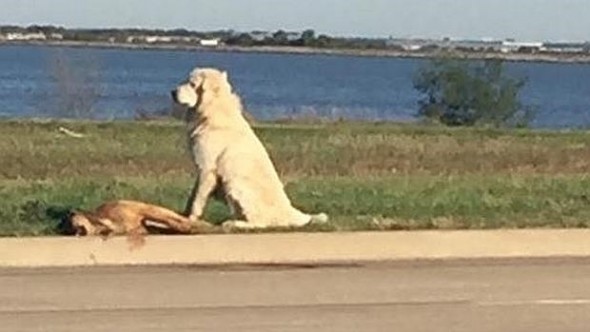