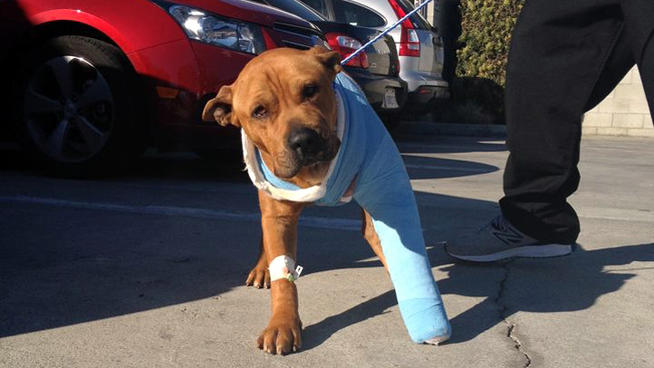 Recently we brought you the story of Philly, the dog who was struck by a car and lied on the side of a Los Angeles street for five hours before police finally came to his rescue.  Witnesses apparently thought he was dead, but did not bother to check on him or call for assistance.

“He was right there on Central for everyone to see,” said officer Jennifer Cohen. “I honestly didn’t even think it was a dog when we first saw him.  His ribs were sticking out.”

They brought him a plate of meat and some water from a nearby taco truck.  But the poor dog was too badly injured to eat; he cried when he tried to sit up.  The officers decided to drive him to Advanced Veterinary Care Center, where it was determined that the dog had a microchip.  The policewomen contacted his owner, who didn’t care for her injured pit bull/Shar Pei mix.

“She basically said, put him to sleep,” Cohen explained.

Philly was surrendered to officers Cohen, Cindy Herrera and Valerie Lancaster.  They issued a plea for help in raising funds to cover his medical treatment.  Two of his ribs are cracked, and his front left leg is broken.

Philly must have his leg cast changed every three days, and wear it for another 14 to 16 weeks.  He developed a respiratory infection, but seems to be recovering.

By Saturday morning, nearly $14,000 had been donated by people who heard the story of the compassionate police officers saving a dog’s life.  So many people donated that the center said they have more than enough to cover his expenses, but there will always be other animals in need.

The heroic officers not only rescued Philly, they are also caring for him until he is ready to be adopted..

“We’re his foster mommies now, basically,” Cohen said.  “We trade off every couple of days, so he’ll be in different homes.  He’s great around kids, and we give him different environments so he is ready to go to his forever home.”