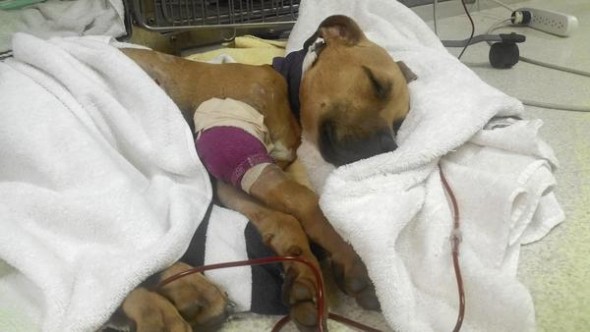 You can read Champion’s first story on www.lifewithdogs.tv by clicking here.

We covered Champion’s rescue recently on LWD and in light of his situation, the public has stepped up big time to help out.  So far, he’s received over $10,000 in pledges to help pay the monumental medical bills he’s facing.

He is thought to have been used as a bait dog in a fighting ring.  Thanks to Me and My Shadow Dog Rescue out of Altamonte Springs, Florida.  On New Year’s Eve he was rushed to an animal hospital in Orange County.  Surgery began immediately, and word of Champion’s situation hit social media at the same point thanks to the rescue group’s president, Julie Galante.

Galante started an online campaign to offset the huge costs that Champion was going to face for surgery and recovery.  He’s expected to have to undergo somewhere between five and seven surgeries to even begin to think about total recovery.

According to the YouCaring.com website, Galante was seeking $3,000 to go towards his first surgery.  That $3,000 goal was blown away quickly, and with almost 300 people donating various amounts, the total was over $10,000.  Most donations are anonymous, but there many people thanking Me and My Shadow for rescuing Champion.

In an update to Champion’s YouCaring.com page, Galante wrote, “We are now looking at blood transfusions, and several more surgeries.  I have no earthly clue how much this dog will cost our small rescue.”

If you wish to donate to Champion’s medical costs, you can visit the YouCaring.com page, or visit the Me and My Shadow Rescue Facebook page for more information. 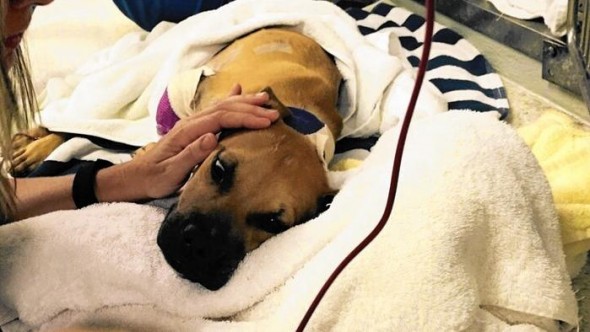