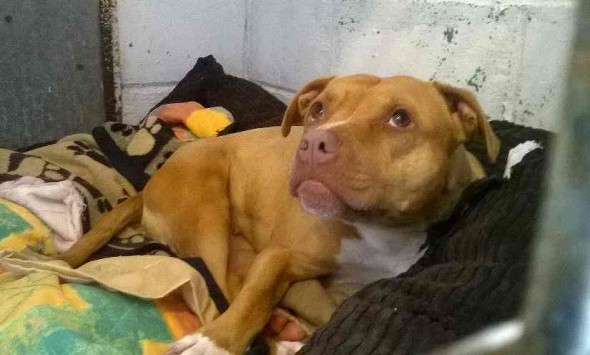 Yesterday, we reported on Stella’s story.  After being deemed “too dangerous” by law enforcement according to the Dangerous Dog Act, Stella was locked up with virtually no quality interaction with humans at all.  Recently, a judge had sent down a “destruction order,” and Stella was facing euthanasia.  However, we’re happy to report that a United States animal sanctuary has offered to take her in instead of ending her life.

After the story of Stella being locked up for two years hit the internet, a charity animal sanctuary in the state of Connecticut is offering to help out.  They are called Animals R Family in Stamford, and they have offered to fly Stela in, and she can live out the rest of her life at the sanctuary.

In a release to the press and social media outlets, Animals R Family said, “Stella was seized by police in the UK, simply because she is a pit bull, and locked in a tiny kennel for two years with no exercise and now they want to kill her.  Stella is a sweet and friendly pit bull who wants love and a family.  It is time for the lies to stop, Devon & Cornwall police.  Stella can come to Connecticut, USA, where BSL [breed-specific legislation] is illegal.  Laura Khanlarian is a true hero for speaking out.”

Laura Khanlarian is a kennels assistant at the private kennels that Stella is being kept at in the UK.  She was outspoken about the mistreatment that Stella faces there, and wants very badly for the laws there to be changed to a fairer situation.  Without her speaking out about Stella’s situation of abuse, we may never have known what was going on.

Stella’s human is also trying to save her.  His name is Antony Hastie, and he has filed an appeal with the court that decided to hand down the death sentence for Stella.  According to Cornwall and Devon police, “(Mr. Hastie has) launched a late appeal against the destruction order against Stella” and she would “remain in kennels until the outcome of the appeal is known”.

Mr. Hastie’s lawyer, Tina Wagon, is a dog law specialist in the UK with the offices of Wheldon Law.  She says that his main goal is to get his dog back.  However, if that isn’t possible, he wants her to be safe, happy and alive.  So he would send Stella to the United States, if it meant she could be all of those things.

So far, a decision on Stella has not been reached.  Stay tuned to Life with Dogs for more information as it is released.  To see yesterday’s story, click here.

203 thoughts on “UPDATE: US Animal Sanctuary Offers to Rescue Stella”