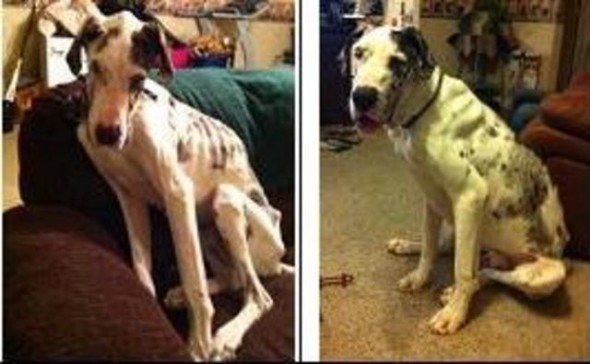 A UPS driver came to the aid of a neglected dog in Indiana last week.  The dog is now recovering and has developed a following of supporters.

Last Monday a UPS driver spotted Phoenix tied to a tree on a short leash outside a home in Bowling Green, Indiana. Conditions outside were freezing and the dog had no shelter and showed signs of neglect. The UPS driver contacted Clay County Shelter informing them that a dog needed immediate care.

The shelter drove to the dog and found him in a fetal position lying against the tree. He had no food, no water, or shelter. He was in such terrible shape the shelter van driver feared the dog wouldn’t make it back to the shelter alive.

Phoenix beat the odds though and surprised a lot of people when he survived his first night at the shelter. Veterinarians found that Phoenix is deaf and had frostbite on his ears. Phoenix is severely underweight and will need to put on significant weight to fully recover. He is currently in the care of a foster family and his progress in the past 11 days has been remarkable though.

The Clay County Humane Society is keeping Phoenix fans up to date with his progress on their Facebook page. Donations can be made online at ClayHumane.com or by mail at P.O. Box 277 Brazil, IN 47834.