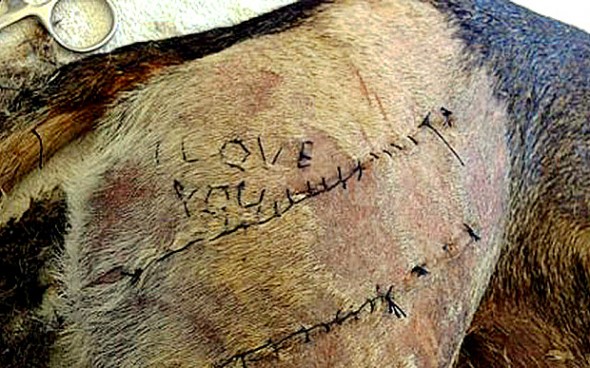 A Polish veterinary student is being investigated for stitching a message to his girlfriend into an unconscious dog’s flesh following surgery.  He posted a photo of what he had done on Facebook, and was quickly reported by friends.

The fourth year student at the University of Warmia and Mazury finished up an operation on a dog’s stomach and sewed the words into its skin.  He then posted the photo on Facebook and tagged his girlfriend, who was quick to come to his defense when others called his action “grotesque” and “unethical” before reporting him.

“What’s so unethical about it?” she inquired.  “He’s learned to sew in order to help and is just showing his skill.”

While the man’s intentions may not have been to cause any pain, as the animal was under anesthesia at the time, it is the lack of maturity and forethought that has people questioning his ability to function as a competent, compassionate, and responsible veterinarian.

“Saying you love someone is not a bad thing, but the fact that this was stitched into the stomach of an animal does seem immoral and unethical behavior from a student of veterinary science,” explained Andrzej Koncicki, head of veterinary studies at the university.  “One of the first points of the Vets’ Code of Ethics is that a vet practicing his profession of public trust needs professional conduct and good morals.”

Students are supposed to work under supervision, so one can only assume that his supervisor is also under investigation.