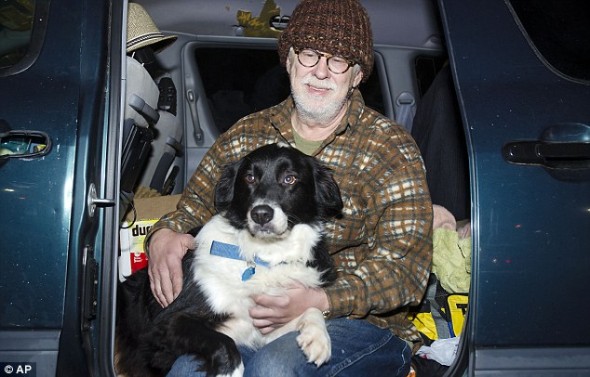 A year ago veteran John Chambers lost his home. When the local homeless shelter wouldn’t accept his dog Scout Chambers opted to live in his van so he could be with Scout. Last week news of Chambers and his dog’s situation was told in a local paper and the people in his community didn’t hesitate to step up and help the veteran and his dog.

In January 2013, John Chambers was evicted from his home in Marietta, Georgia. The Vietnam War veteran says he was wrongfully evicted without proper notice form the Federal Home Loan Mortgage Corp.

Once evicted Chambers attempted to go to a local homeless shelter but they wouldn’t permit him to bring his dog Scout. Not willing to leave behind his dog, Chambers instead opted to live with Scout in his minivan in a Wal-Mart parking lot. He reached out to the Veterans Administration for help, but wasn’t able to get much help from them.

“It was a wrongful foreclosure that got me out in the streets,” said Chambers. “I’ve been having kind of bad luck but still have my hopes up.”

Chambers has been trying to get his house back through a lawsuit, but the legal fees have piled up. He has gone through three lawyers trying to fight for his home. He worked at Wal-Mart for 11 months, but when the store found out he didn’t have a stable residence he lost his job as well.

“I had worked for them until they found out I was homeless and they let me go,” said Chambers. “They said if I got a place to stay they would be happy to give me my job back.”

Last week a local paper wrote a story about Chambers and his struggle and members of the community have stepped up to try to help him. They’ve offered him money, temporary shelter and food for Scout.

“Tons of people have come out to the car, dropping off food, cards, asking how they can help, telling me I could stay the night in their house,” said Chambers. “This is surreal.”

The American Legion Post 29 has paid for an extended stay hotel room and is making it their goal to find Chambers a new job. Local real estate agent, Melody Unger, has formed a nonprofit group to try to save Chambers’ home.

“She’s trying to get investors to actually buy my house, which would be my best bet because I’d like to drop this lawsuit like a hot potato,” said Chambers.

If you would like to help Chambers and Scout you can make a donation to JRC Home Fund Inc. Donations can be mailed to the following address: