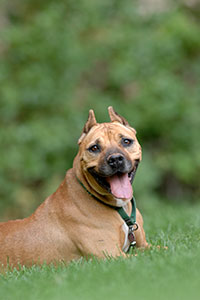 Georgia, one of the rescued Vicktory dogs,  captured the hearts of many and changed the way people viewed pit-bull-terrier-type dogs. On Monday, Georgia passed away leaving an important legacy behind.

Georgia became famous as one of the dogs rescued from Michael Vick’s dog fighting operation. Despite all she had been through Georgia let her loving and sweet personality shine through.

“All of the Vicktory dogs captured our hearts, but maybe none more than Georgia,” wrote Gregory Castle, CEO of Best Friends Animal Society.

Georgia  spent time living at Best Friends until she was adopted by a woman named Amy two years ago. She spent the last years of her life living n a warm home being loved the way she deserved.

Before being adopted she helped change the image of dogs like her by traveling with Dogtown trainer John Garcia and appearing on national television shows like the “Ellen DeGeneres Show” and “Larry King Live.”

On Monday Georgia died at home with Amy by her side. Her age had caught up to her and her kidneys had started to fail. It has been a difficult loss for Amy and for Georgia’s family at Best Friends.

“I’ll always remember her pink collar and beautiful smile,” wrote Castle. “As with all the Vicktory dogs, she exuded a bright light and love that was very special. I am heartbroken today to know that light is gone from the Earth. However, I’m forever thankful for Georgia’s contributions to the future for pit-bull-terrier-type dogs. She has truly left a mark on the world.”