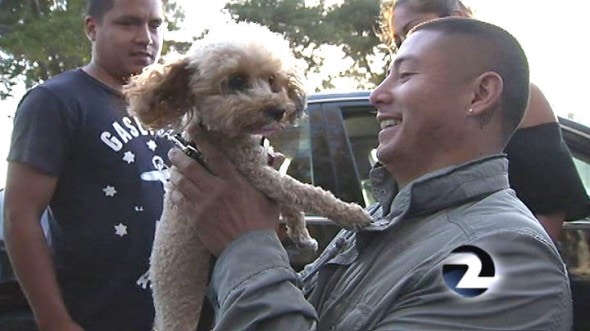 Arthur Renowitzky from San Leandro, California was missing more than just a pet when Love, his therapy dog, went missing after an outing at a local marina.  Thankfully, this past Thursday, Love and Arthur were reunited.

Arthur was left paralyzed from about the waist, down, after being shot in the back during an armed robbery going on outside a San Francisco night club seven years ago.  He got Love as a therapy dog when he began his recovery.

“I went through a lot of depression and she’s been my support system,” said Arthur.  “She’s been with me during my surgery, my rehab.”

Arthur has since become a motivational speaker and tries to help others with disabilities and undergoing other hardships.

“She comes with me to hospitals when I go to visit patients who have been newly injured with spinal cord injuries and paralysis and she hops on the hospital beds and licks the,” said Arthur.

Arthur and his family offered a $1,000 reward for Love’s safe return.  Word Love went missing was soon up all over social media, and pretty much everywhere they have ever been together.

Later this past Thursday, Arthur and his family received the call Love had been found.  When finally reunited both Arthur and Love were overjoyed to be back together.

“I’m never going to let her go.  I’m getting her micro chipped and a collar.  I’m 100 percent sure this is Love!” said Arthur.

It turns out that a man had somehow purchased Love for his aunt off of two people in a Walmart parking lot in Oakland.  It was not made public if the man responsible for Love’s safe return actually collected on the reward.