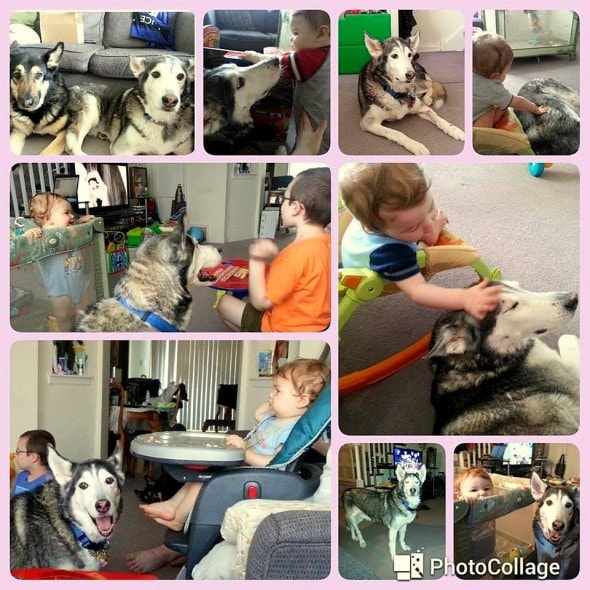 The name Vlad strikes fear into the hearts of many, bringing to mind notions of Vlad the Impaler, the inspiration for Dracula.  But this Vlad couldn’t be more contrary – he’s a rescue dog who gladly took on the role of shepherd to his family’s new baby, even once trying to steal him for his own.  But now he is facing a medical emergency and his family is desperate to save him.

This plea comes from his mom:

My name is Danielle and I created this GoFundMe page on behalf of my second furry kid, Vlad. We adopted him when he was two years old from Hillside S.P.C.A in Schuylkill County, nearly a two-hour drive from our home. He was known as “Chance” while he was there. We adopted him to keep our wild first furry kid (Zoey) in check – she is an alpha dominant female, the funny thing is Vlad wound up being our alpha dominant male. They had a rough patch the first couple of weeks, but have become inseparable.

When Vlad was five years old, my husband and I decided to have our first human kid. We initially expected Zoey to become our son’s protector, being the female, but to our surprise Vlad filled that role as if our son was his own. When we brought our son home from the hospital Vlad honestly tried to carry him off and claim him as his own. Vlad barely slept for three days straight those first few nights. If our son made a peep, Vlad was right there to check on him. Vlad would not let anyone near our son, not even my parents. To this day, Vlad watches over our oldest son who is now six years old. He is now a “big brother” to our second human son who is 20 months old. Vlad is known as “Bubba” to our sons, which is also each of their first words.

Near the end of December 2015, we noticed a change in Vlad’s eating behavior. He started to slow down eating and Zoey was actually beating him out of the kitchen. This was unlike him because he will gobble food up like it is going out of style. We took him to the vet thinking maybe there was something wrong with his teeth. Our vet had noticed a growth about the size of a nickel hanging down from his upper right side of his mouth. We never noticed it ourselves because Vlad would not let us get that close. The vet said it looked suspicious. He suggested we do a dental cleaning and he would remove the growth to be biopsied. Vlad’s blood work came back great the evening before his dental cleaning, so I thought we were in the clear of it being anything serious.

A week after his dental cleaning the biopsy was found as “probable cancer” because of the amount of cells that were seen. I was devastated and heartbroken to say the least as I’m sure many of you would have been, too. 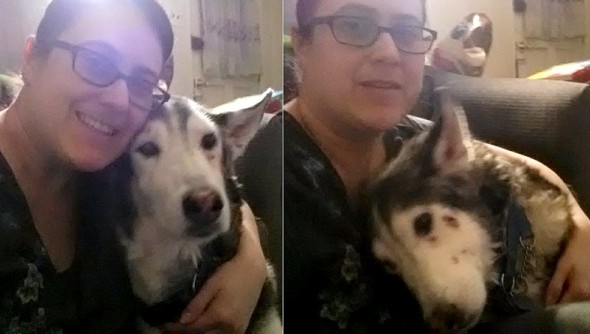 We took Vlad to an oncologist at VSEC in Levittown. She said the cancerous cells were low meaning it is a low grade cancer and does not appear to be an aggressive kind. She took chest x-rays and, thankfully, his lungs were clear. However, he has restricted airflow in his right nasal passage and she is concerned there is a blockage in his nose or quite possibly a tumor growing inside. The only way to check in his nasal passage is via a CT scan.

I swore to Vlad that I would fight as much as I could financially. This is what led me to creating a GoFundMe page for Vlad. We only need approximately $1,200-$1,500 for the CT scan. Then depending on those results we may or may not do radiation therapy and that is approximately $3,000 – one treatment a week for four weeks. I absolutely would like to have the CT scan done but with our budget we can use help, so I am reaching out to my family and friends as well as others who may be or have been in my position. GoFundMe is the means to help raise money for Vlad, so intend to try my best to do so.

I am hoping to raise at least $1,200 to start so we can get the CT scan done as soon as possible this way we have more answers and can develop a more solid game plan to help Vlad.

Vlad is an important part of our family, not only to my husband and me, but he is a huge part of our children’s lives. He is the greatest furry family member that we could have ever asked to be in our lives. We saved him from uncertainty in the shelter and he grew into an amazing pup. I’m so proud to have him in our family and I plan to fight for him as long as I’m able to. I owe it to him because he will be turning 11 years old on 3/21/2016 and I feel in my gut that he has many years ahead of him as long as we are able to help him along. I am hoping that many of you can open your hearts and help our Vlad.

If you are able to donate anything to our cause, we would be absolutely grateful. If you can even share our cause on our behalf to your family, friends, and Facebook groups within the furry kid community that would be amazing.

15 thoughts on “Vlad the…. Beloved Babysitter?”