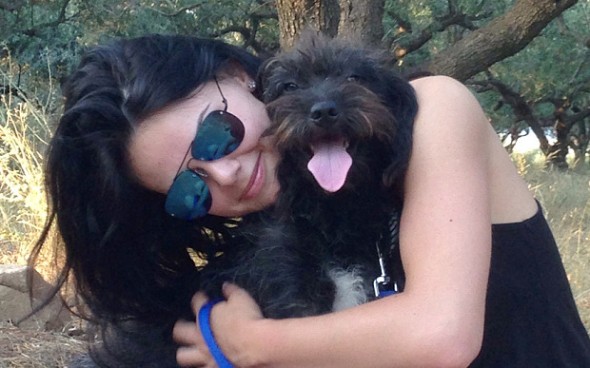 Georgia Bradley, a British tourist, was about to be sexually assaulted by a pair of aggressive men on a Greek beach when a stray dog sprang into action and staved off the attack.  Though it took a lot of work, the woman dedicated herself to making sure that she brought her heroine back home with her.

Georgia’s boyfriend had gone to a café, so she opted for a stroll on a Crete beach.

“I decided to go for a walk along the beach, and found two Greek men who kept harassing me to go out for a drink. I kept telling them I didn’t want to,” she explained to The Telegraph.  “Then one of them grabbed me on the arm and I didn’t know what was going to happen. I was on my own and it was a very scary and difficult situation.”

But she says that a little black dog “appeared from nowhere” and came to her rescue.  She viciously barked at the men until they fled.  Georgia headed back to the apartment where they were staying, and ever the hero, the dog escorted her home.  She saw the dog, whom she called Pepper, for the rest of her trip.

“Pretty much every evening we saw her around outside the bars and restaurants, trying to get the attention of the tourists,” she said.  “Every time we got close to her she wouldn’t let you stroke her. She was very gentle, but was too scared to let you close.” 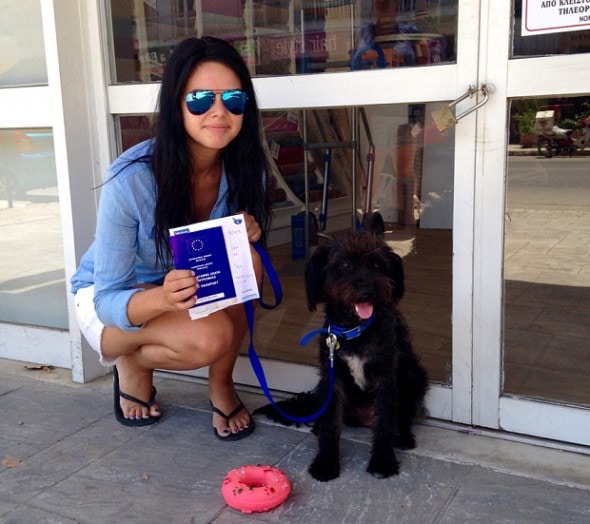 Georgia tried to convince a local animal shelter to take her in, but they refused.  Saddened that there was nothing she could do, she and her boyfriend returned home to Calstock, Cornwall.

“When we left to go to the airport, we looked back and Pepper was running after the car. It was heartbreaking.  When I got home I couldn’t stop thinking about her so I took the soonest flight back out that I could, which was two weeks later.”

Over the next five weeks, Georgia made it her goal to find the dog and bring her home.  She fortunately found Pepper wandering along the same Georgioupoli beach.  She took her to be microchipped, vaccinated against rabies, and given a passport.  But before Pepper could come to the UK, she had to spend three weeks in quarantine.

Upon her third trip to Crete, this time to pick up Pepper, Georgia learned that her new dog was pregnant.  A week after being in her new home, Georgia gave birth to six puppies.  Hopefully she will now be spayed.

“It has been such a crazy journey. But I am over the moon. Pepper has settled in brilliantly.”

Perhaps it was her maternal instincts kicking in that caused Pepper to come to Georgia’s defense.  Or maybe it’s just because dogs are awesome that way.