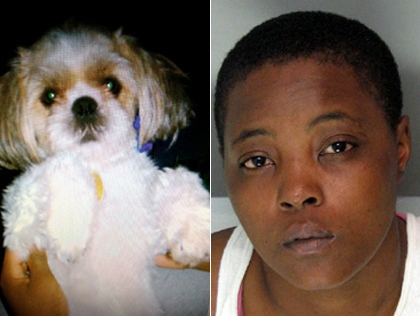 The Star-Ledger of Newark, New Jersey is reporting that 27-year-old Haniyyah Barnes has pleaded guilty to charges of breaking in to her neighbor’s home and then throwing their 2-year-old Shih Tzu named Honey Bey into oncoming traffic in August 2011.  Poor Honey Bey didn’t survive.

The charges she’s pleading guilty to are to be burglary, animal cruelty and theft.  For her despicable efforts, the Essex County prosecutors are recommending she receive a six-year prison term, and have to pay $2,600 in restitution. Best of all perhaps, is Barnes would be barred from owning, buying, or living with any animals for a minimum of 10 years.  There would be a few other conditions related to the sentencing, such as drug and alcohol counseling, and participation in anger management.

According to official reports, Barnes admitted to throwing the dog into traffic after it rushed her when she broke into her neighbor’s home.

The act was caught first hand by a police officer siting nearby in a patrol car.  He said in court he did witness the neighbor following Barnes outside, begging her to stop and not hurt the dog the whole way.

“It was a horrific crime and I think the punishment reflects that,” said Michele Miller told The Star-Ledger after the hearing. “She broke into someone’s home and killed their dog and they watched it happen.  Not too many things are more disturbing than that,” said Miller.

Barnes is expected to be facing this sentence with these conditions when she is due back in court the 14th of July 2014.