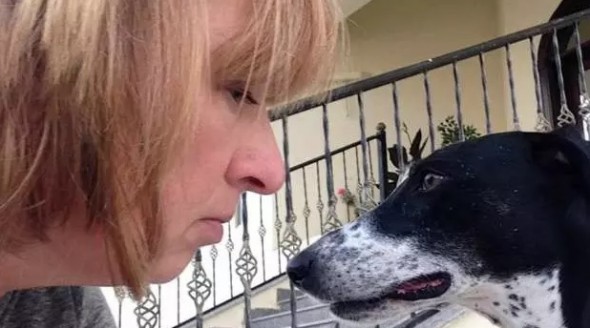 When Brenda Biekx stopped her car in busy traffic in Doah, the capital city of Qatar, to rescue an injured stray, she couldn’t have imagined what kind of story she would end up becoming part of.  She didn’t know it, but the “stray dog” she was rescuing was not a stray at all, but a member of the Qatari royal family.

The poor dog was trying to pull herself across the busy road, with her leg very obviously broken and flopping around.  Most other drivers either just avoided the dog altogether, or didn’t even notice her at all.  Beikx pulled over and followed the frightened dog for about a mile before she finally let Biekx help her.

Biekx wrapped the dog up in a blanket and took her to an animal hospital.  Before she realized it, it was late in the evening, and there was a full moon in the sky, so she started calling the dog Luna.

Once she arrived at the hospital, staff there took Luna in and did an evaluation.  It was going to cost over $3,500, not including incidentals, and barring the discovery of anything more serious.  It wasn’t even a question; Biekx said she would cover the cost of whatever was needed.  She wasted no time at all setting up a GoFundMe account, and quickly was at almost $4,000.

The GoFundMe campaign not only gained a good deal of money towards the cause, but it also attracted the attention of the family the dog belonged with.  That family just so happened the royal family of Qatar.  Mariam Al Thani, one of the royals, wrote a comment on the site saying the dog’s actual name was Leslie, and that she was her dog.  Both Biekx and Leslie’s co-rescuer, Christine Cornejo, were invited to the palace to discuss returning the dog.

“When we got there, Christine said, ‘This is the place,’” said Biekx.  “I said, ‘That can’t be right.  That’s not a house, that’s a mall.’  We went all the way around this enormous block and I pulled my unwashed Kia Soul up to those huge gates and said, ‘Is this where Mariam Al Thani lives?’  And he said, ‘Yes, ma’am, we’ve been expecting you.’”

While at the palace, they got to meet a real Sheikah and her daughter and have tea with them.  They had snacks, chatted and felt all around very welcome.  That’s when they were told about how Leslie is a bit of a scared and nervous dog.  She managed to get off the property at one point, and they haven’t been able to locate her ever since.  They were really relieved to learn she was going to be ok.

“She was very gracious and so, so grateful,” Biekx recalled of her young hostess, who offered to pay all costs. “It was surreal, and something out of a movie or storybook.  We were very calm and cool and casual while we were meeting with the Sheikha and her daughter.  But when Christie and I got back to the car, we screamed like little school girls: ‘Oh my God!’”

The very next day, a specially made, three tier chocolate cake with real gold leaf was delivered Biekx’s home.  Talk about amazing!  Biekx decided that she would share the cake with her co-workers, who had also put in money to help pay for the dog’s medical bills.  All of the money that was raised for the dog will be going to a second chance rescue in Qatar.

In case you were wondering about the cake’s taste, Biekx said with a laugh, “It was the best cake I ever had in my life.  I ate it for breakfast, lunch and dinner.”