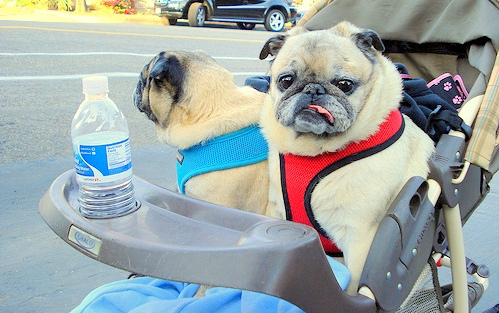 Move over, babies – dogs are taking over!  Just kidding, but recent studies are showing that fewer American women are having babies these days, and are preferring to have dogs instead.  It’s no surprise – dogs are funny, snuggly, and comparatively easier to care for.

Though this isn’t true in all cases, caring for a dog can just be easier and less stressful.  No diaper changes, fewer temper tantrums and no expensive schools or extra-curricular activities to spring for.

“I’d rather have a dog over a kid,” said Sara Foster, an equities trader who would never trade her French bulldog Maddie in for a baby.  “It’s just less work and, honestly, I have more time to go out.  You… don’t have to get a baby sitter.”

The birth rates in United States have dropped from almost 70 per 1,000 women in 2007, to just under 63 last year.  This presents about a 10 percent drop in rates.  American women birthed fewer babies, 400,000 fewer to be exact, in 2013 as compared to six years ago.  This drop seems to be predominantly among 15- to 29-year-olds.  The chart included below shows just how much disinterest there seems to be within this age group when it comes to having babies. 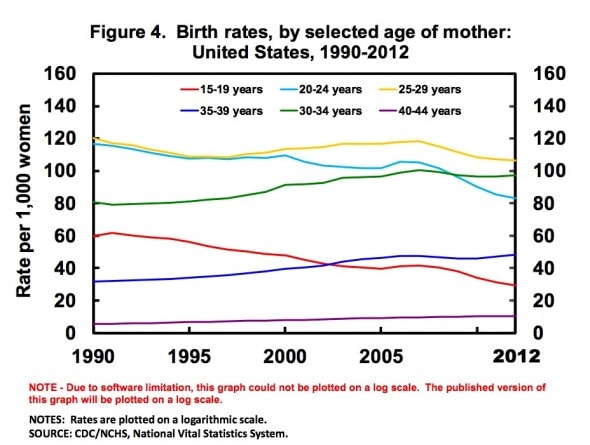 On the other hand, for dogs that weigh in at 20 pounds or under, the numbers seem to be doing the exact opposite.  Apparently, we have been acquiring more and more small dogs every single year.  Since 1999, the populations of these smaller dogs has far more than doubled, and projections show a continuing upward swing in these numbers.  This information comes from Euromonitor.

Some people may believe it’s a coincidence that Americans are having fewer babies, and small dog populations are on the rise.  But evidence from Damian Shore, an analyst at Euromonitor, says it’s not coincidental. 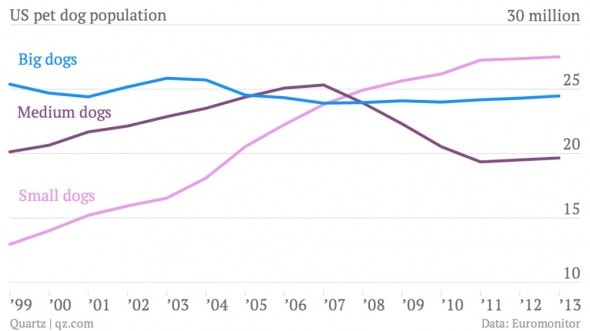 “There’s definitely some replacement happening there,” said Shore.  “Women are not only having fewer children, but are also getting married later. There are more single and unmarried women in their late 20s and early 30s, which also happens to be the demographic that buys the smallest dogs,” Shore said.

It would also seem that that people are treating their dogs a lot more like humans as well.  Purchasing high priced, premium dog foods, even the most expensive kind, has shown to grow by 170 percent through the past 15 years.  This type of food now accounts for 57 percent of the overall dog food purchases. 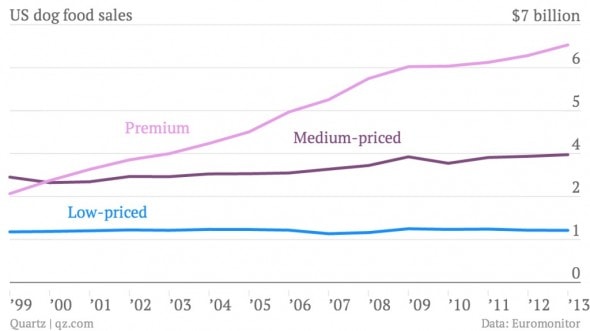 It needs to be said that not all small dog purchases and adoptions are really kid substitutes.  This trend also seems to be indicative of a seeming national migration to larger cities.  In these types of urban settings, larger dogs can often be difficult to keep.

It does seem however, that things seem to be trending where women are entering motherhood later in life, and this does play a part in the small dog population boom.  It’s often not too hard to see that many people even treat their smaller, furrier family members just like their own children, and they may be onto something.  A study done last year found that dogs do form the kind of bonds of dependency with their human moms and dads, not too dissimilar to the one we humans form with our parents.

There’s nothing wrong with having children, and many families have no problem juggling both kids and critters.  But for others, the choice is clear.

“Dogs are better! Look at Toliver! He’s great, except he snores a lot. He even has his own Instagram,” Mary Smith said of her Frenchie. “A dog is easier to transport than a child. It’s less final than having a child.”