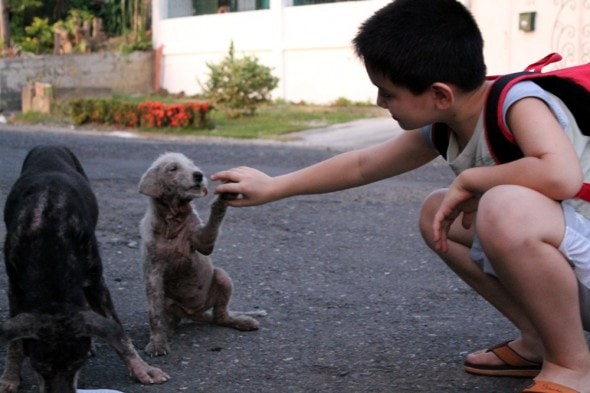 A father in the Philippines became curious about his son’s daily walks and decided to tag along one day. What he discovered was his son was helping to feed and care for several stray dogs that were hungry and suffering from mange. Now the father is helping his son care for the dogs and fulfill his dream of one day starting an animal shelter.

Reddit user “i_belive_in_pizza” posted to the popular forum about what he discovered when he accompanied his son on one of his daily walks. Every day for two weeks his son left their home in the rural Philippines carry a backpack.

When his son stopped at a point in the road a group of stray dogs came running towards him. The dogs were hungry and appeared to be infected with mange. Every day the young boy took food to the dogs and had gradually been gaining their trust.

The boy’s father was impressed with his son’s compassion and posted about it to the popular forum, the post quickly began gaining a lot of comments from people who were also touched and wanted to help.

The father is now helping the boy provide food for the stray dogs and hopes to help them get treated for their skin infections. The young boy, who clearly has a passion for helping animals, hopes to one day open his own animal shelter. According to his father there aren’t any in the area.

The young boy has set up a website called Happy Animals Club. The site keeps his now many fans updated on the dogs and has a PayPal donation link to help him feed the animals and one day open his dream shelter.

4 thoughts on “Young Boy Helping to Save Stray Animals”