This story comes from The Animal Rescue Site, which in addition to featuring fan-submitted rescue stories, offers a wide selection of clothing, décor, pet supplies and other gifts.  For each purchase made, a food donation is given to shelter pets in need. 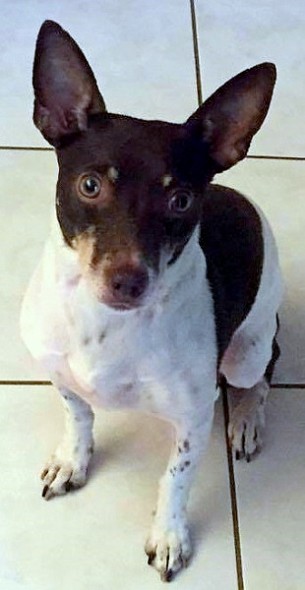 When I was a little girl, all I ever wished for on birthday candles and shooting stars was to have a pet dog. But I couldn’t have one because my dad was, and still is, allergic. I always wanted that unconditional love you get from pets and I think that’s why, years later, I ended up working at my local animal shelter for three years.

I’ve seen a lot of sad stories there and I wanted to add a little more happiness, so I started fostering kittens and puppies. I had to beg my parents, as I was still living with them at the time, and they agreed. I think they agreed because these animals were small and the kittens were too young to go about the whole house.

Well, two years into my job my supervisor asked if I would like to foster an adult dog. He is a medium sized dog and around 3-5 years of age. I told her that I would get back to her as I had to ask my parents. They were a bit hesitant, but in the end they agreed. I was so overjoyed!

The dogs were all rat terriers and they were all from a hoarding situation in Ohio. There were over 44 dogs!

I took in a dog called Mike. He had pee stains on his lower half, he had scabs all around and over his ears, no fur on the back of his ears, and he was underweight. He would not come out of his carrier so I would take the top off and get him out that way. He also needed to be umbilical cord trained and could not leave the property because he was so frightened of everything. I moved in with my grandparents because I knew I loved this dog and needed to adopt him.

And today, a year and a half later, he is a very happy dog! He is at a healthy weight, all his hair has grown back, he loves going to the off-leash parks, and hardly leaves my side.

Submitted to The Animal Rescue Site by Gabby of Barrie, Ontario